Armenia Appeals to ECHR in Connection With Situation in Nagorno-Karabakh

Azerbaijan, Armenia on war footing after casualties in heavy fighting

Early winter in the Alps

The Breakout Scale: Measuring the impact of influence operations

It takes two to troll.

Joe Biden’s presidential campaign took a wily move from the Trump campaign playbook, buying up the domain KeepAmericaGreat.com and using it to post anti-Trump messages.

The slogan is frequently used by President Trump as part of his 2020 reelection effort. Instead of MAGA boilerplate, however, visitors to KeepAmericaGreat.com are confronted with a laundry list of Trump’s alleged broken promises.

Trump wants to host G-7 — and Russia — after election

The Trump vs. Obama economy — in 16 charts

“Trump isn’t looking for a second term – he’s looking for a do-over. Here’s how Trump’s record stacks up against the promises he made to the American people,” reads an intro to the material.

The website URL has existed in some form since 2004, though in recent years it has taken on a colorful new life among resistance trolls, according to the Internet Archive’s Wayback Machine. For much of his presidency, it sold anti-Trump clothing and other merchandise. By September2019, it was owned by billionaire Tom Steyer and used during his fly-by-night presidential campaign. It appears to have been officially repurposed by Team Biden this month. 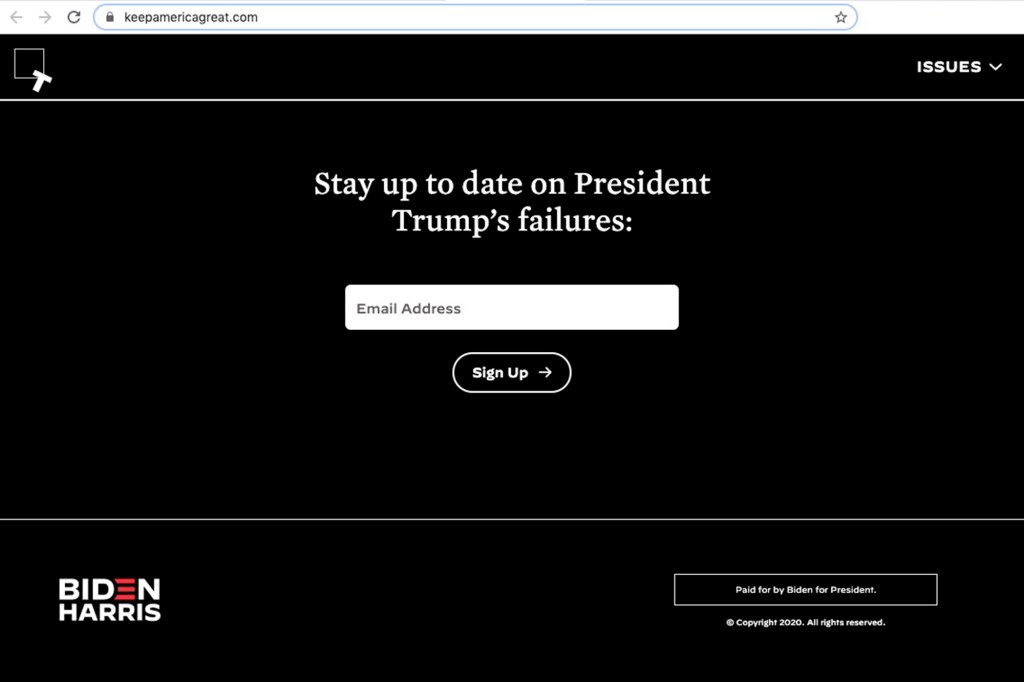 The Trump team is no stranger to similar campaign hijinks. Anyone who currently visits their website and reaches an error page will be directed to an image of a confused-looking Biden, with a large message that reads “It appears you are as lost as me.”

Armenia Appeals to ECHR in Connection With Situation in Nagorno-Karabakh

Azerbaijan, Armenia on war footing after casualties in heavy fighting

Early winter in the Alps

The Most American COVID-19 Failure Yet

The T-72B3 is a third-generation successor to the legendary T-72 Soviet battle tank. According to a video recently published...